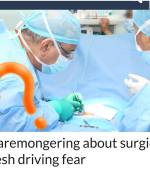 Doctors are accusing the media, lawyers, and even patients speaking out, of scaremongering. They think because of them, people are being scared away from surgeries for hernia, prolapse, and incontinence that are done with surgical mesh. Not because of the risky mesh products…. no, they think it’s just because of all the “hype” of those… Read More ›

Are you Sick and Tired of Lawyer Ads about MESH?

Many doctors and advocates for the use of mesh continue to promote using surgical mesh for pelvic repairs, routinely telling people that, “Without mesh, surgery often fails in one to five years because our tissues are not strong enough to hold the repair long term.“ ~  Sherrie Palm,  Founder of APOPs (Association for Pelvic Organ Prolapse… Read More ›

Sharing this excellent article from Mesh Medical Device Newsdesk, called, “Top 10 Myths Woman are Told Today about Pelvic Mesh“, by Jane Akre.  It talks about  things many women have been told about mesh, and/or mesh complications. Things that are just plain wrong, but are still being told routinely to women – even today.  Women that… Read More ›